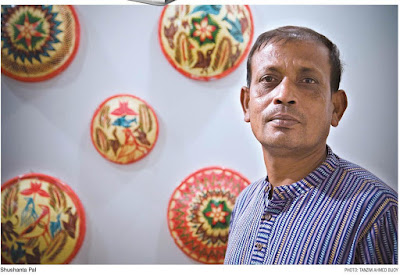 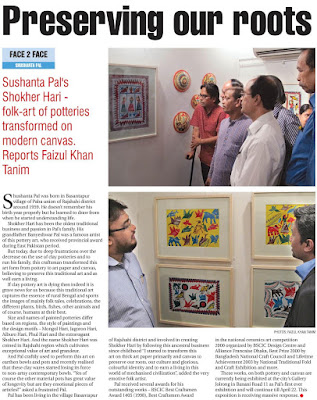 Preserving our roots
Sushanta Pal's Shokher Hari -folk-art of potteries transformed on modern canvas. Reports Faizul Khan Tanim
Shushanta Pal was born in Basantapur village of Paba union of Rajshahi district around 1959. He doesn’t remember his birth year properly but he learned to draw from when he started understanding life.
Shokher Hari has been the oldest traditional business and passion in Pal’s family. His grandfather Banyeshwar Pal was a famous artist of this pottery art, who received provincial award during East Pakistan period.
But today, due to deep frustrations over the decrease on the use of clay potteries and to run his family, this craftsman transformed this art form from pottery to art paper and canvas, believing to preserve this traditional art and as well earn a living.
If clay pottery art is dying then indeed it is grave news for us because this traditional art captures the essence of rural Bengal and sports the images of mainly folk tales, celebrations, the different plants, birds, fishes, other animals and of course, humans at their best.
Size and names of painted potteries differ based on regions, the style of paintings and the design motifs – Mongol Hari, Jagoron Hari, Aiburo Hari, Phul Hari and the extravagant Shokher Hari. And the name Shokher Hari was coined in Rajshahi region which cultivates exceptional value of art and grandeur.
And Pal craftily used to perform this art on earthen bowls and pots and recently realised that these clay wares started losing its force to non-artsy contemporary bowls. “Yes of course the other material pots has great value of longevity but are they emotional pieces of articles?” asked a frustrated Pal.
Pal has been living in the village Basantapur of Rajshahi district and involved in creating Shokher Hari by following this ancestral business since childhood “I started to transform this art on thick art paper primarily and canvas to preserve our roots, our culture and glorious, colourful identity and to earn a living in this world of mechanised civilization”, added the very emotive folk artist.
Pal received several awards for his outstanding works – BSCIC Best Craftsmen Award 1405 (1998), Best Craftsmen Award in the national ceramics art competition 2000 organized by BSCIC Design Centre and Alliance Francaise Dhaka, Best Prize 2000 by Bangladesh National Craft Council and Lifetime Achievement 2003 by National Traditional Fold and Craft Exhibition and more.
These works, on both pottery and canvas are currently being exhibited at the city’s Gallery Jolrong in Banani Road 11 as Pal’s first ever exhibition and will continue till April 22. This exposition is receiving massive response.
http://www.theindependentdigital.com/index.php?opt=view&page=25&date=2011-04-18
Preserving our roots - Sushanta Pal's Shoker Hari of Bangladesh

These curtains will make them prone to tangles

What is the only way to hang the bed?

Place towels on the floor below the curtain.

Wipe clean with a damp, damp cotton cloth, and lightly rub on dirty areas as needed.

Allow to dry and remove the bed sheet background.

Some velvet curtains are machine washable while others need dry cleaning. Check the manufacturer's label

Popular posts from this blog New face on the block

Nobonita Chowdhury is yet another upcoming artiste whose solo album of Lalon songs, arranged by Ayub Bachhu, will hit the market by June this year from Gaanchil record label. In this interview, she talks to Faizul Khan Tanim about how she started her musical journey and the serenity she derives from Lalon geeti

New Age (NA): How did you get in to music and why did you choose Lalon as your canvas or your field of work?
Nobonita: I started taking music lessons from when I was three and half years old. My parents never asked me or my older sister whether we wanted to learn or not; they wanted their children to sing, and so we started singing as soon as we started to talk. My first music teacher was Krishnakanta Acharya, who gave me the initial lessons in music. Then I started taking only Rabindra Sangeet lessons from Wahidul Huq when I was around eight or nine years old. When I first met him, he instantly became my friend, philosopher and guide of my life. I think br…
Read more

i'm sick of our political situation and hence an allegorical piece about our psyche :-]

Begging for LivingThere is a popular saying - Never stand begging for that which you have the power to earn - but many people here beg day in and day out conveniently ignoring the significance of working and many of them deceive by taking resort to heinous means to get sympathy of the people. WritesFaizul Khan Tanim

A case study: A moderately-dressed man wearing proper sandals comes to Green Road, opposite to the clinics each day. And as the shopkeepers say, he comes as a prince, goes to an alley and changes to a pauper in rags and sporting his scrawny looks, start begging. Residents say, he has almost two cell phones for the past ten years and lives quite a decent life without having to worry about food or shelter for him or the family. This is only one of the cases from thousands found in our majestic Dhaka.